Professor William Drummond has had an impressive career as an educator and award-winning journalist. This includes stints at The (Louisville) Courier-Journal, where he covered the civil rights movement, and the Los Angeles Times, where he was a local reporter, then bureau chief in New Delhi and Jerusalem and later a Washington correspondent. Drummond was appointed a White House Fellow in 1976 by President Gerald Ford, worked briefly for Secretary of State Henry Kissinger and eventually became associate press secretary to President Jimmy Carter. In 1977 he joined National Public Radio and became the founding editor of "Morning Edition."

In 1983, he joined the faculty at the University of California, Berkeley, where in addition to teaching students, Drummond twice taught an introductory journalism course pro bono under auspices of the Prison University Project for dozens of inmates at San Quentin Prison.

He and moderator Robert Rosenthal, who has visited inmates at San Quentin many times with a program called Guiding Rage into Power and also has had a remarkable career in journalism, will discuss how the prisoner-run newspaper San Quentin News was recalled to life under an enlightened warden and newspaper veterans, including Drummond. They will also discuss how the COVID crisis affected prisoners and prison staff.

Drummond told the story of the San Quentin News in his book Prison Truth, revealing how the project helped transform the prison from a "living hell" into an environment to foster positive change in the inmates' lives. One reviewer wrote, "Prison Truth illustrates the power of prison media to eventually humanize the experiences of people inside penitentiary walls and to forge alliances with social justice networks seeking reform."

Join us for this important discussion.

Copies of Prison Truth: The San Quentin News Story, may be purchased during checkout (shipping to domestic U.S. addresses only).

Board Member: Center for Investigative Reporting 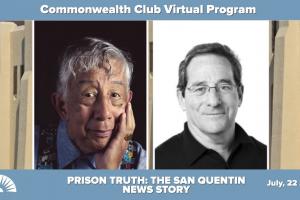