School's out for the summer, but come fall, most students will be returning to in-person classrooms across the country. For some students, every day in school is another day of possible bullying by their peers.

Join us for a discussion with a young award-winning filmmaker and actor on the impacts of peer bullying through the lens of LGBTQIA+ high school students.

Kabir McNeely is an award-winning American actor who grew up in San Francisco. He has drawn international interest through his uniquely expressive and direct acting style. He began his acting career in 2015 when he played a supporting role in Ruth, a student short film. Since then, he has trained extensively with the American Conservatory Theater, where he also performed in their annual main stage production of A Christmas Carol in 2016 and in Urinetown: The Musical. In 2020, he wrote and directed the award-winning short film Blue Girl, in which he also appeared in. Throughout 2021, McNeely has had a steady stream of supporting roles in short films such as Family Story, Blue Girl 2025 and Pink Purple and Blue. He also gave an award-nominated lead performance in the short film Keith. 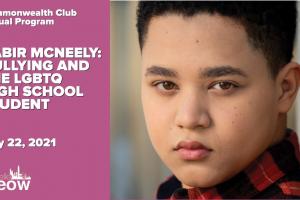