Frankly, We Did Win This Election, authored by The Wall Street Journal’s senior White House reporter Michael Bender, reveals a deeply reported account of Donald J. Trump’s final year as president of the United States—from his first impeachment in January 2020 to his second almost exactly a year later.

Bender chronicles Trump and his campaign team as they struggle through an epic convergence of the COVID-19 pandemic, the ensuing economic collapse, and the civil rights upheaval that unraveled their reelection strategy. Bender’s refined sourcing brings readers within the walls of the White House for the inside story of how Trump lost, drawing a straight line from his presidency to his defeat and ultimately to the deadly storming of the U.S. Capitol building.

Bender joined The Wall Street Journal in 2016 and has since published more than 1,100 stories about Trump. He has been recognized for his coverage, receiving both the Gerald R. Ford Foundation Journalism Prize for Distinguished Reporting on the Presidency in 2019 as well as the National Press Club award for political analysis in 2020.

Join Bender and moderator Maggie Haberman, a Pulitzer Prize-winning journalist from The New York Times, as they go into the exclusive details of how Donald J. Trump lost the 2020 election.

Copies of Frankly, We Did Win This Election are available for purchase at checkout (U.S. domestic shipping only).

Michael Bender
Senior White House Reporter, The Wall Street Journal; Author, Frankly, We Did Win This Election: The Inside Story of How Trump Lost; Twitter @MichaelCBender 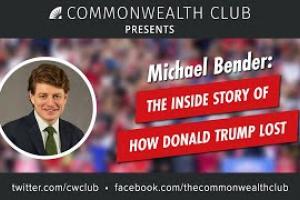