The Constitution clearly states that Americans have the right to keep and bear arms, an argument often used to dispute proposed gun control legislation. However, historian Carol Anderson says that deeper analysis of the formation of the Second Amendment reveals ulterior, racialized motives to keep Black people powerless and oppressed. In her new book The Second: Race and Guns in a Fatally Unequal America, Anderson uncovers the history behind the Second Amendment and argues that it was designed to keep African Americans vulnerable and subdued.

As a professor of African American Studies at Atlanta's Emory University, Anderson’s research primarily focuses on how racial inequality affects the processes and outcomes of policymaking. In early America, slaves were prohibited from owning, carrying or using a firearm. She says this sentiment remains today as measures to expand and curtail gun ownership are aimed to keep the Black community neutralized and punished. In an era when many are reexamining government policy through a racial lens, Anderson sheds new light on another mysterious dimension of anti-Blackness in the United States.

Join us in conversation with Carol Anderson to understand the connection between Blackness, gun ownership and racial equality.

Copies of The Second are available for purchase at checkout (U.S. domestic shipping only); our thanks to Marcus Books for fulfilling book orders 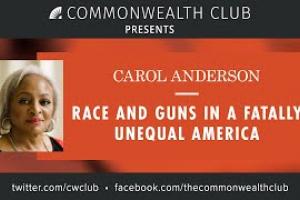