Join us for a talk with Nick Cho, known as "Your Korean Dad" on TikTok, where he has attracted more than 2.7 million followers.

Nick Cho was born in Seoul, Korea in 1973. He immigrated to the United States in 1975 with his father and mother, eventually settling in the Washington, D.C., suburbs in Northern Virginia, where he and his younger sister, Jennifer, grew up.

After a number of different jobs including car sales, music teacher, and assistant to a radio producer for a nationally syndicated comedy radio show, in 2002 he opened a small coffee shop in the nation's capital called "murky coffee." It quickly became renown throughout the country as one of the pioneering cafes for what would be called "third wave coffee."

He moved with his wife and partner Trish to San Francisco in 2010, starting a new coffee company with her called Wrecking Ball Coffee Roasters. Both Nick and Trish would split time between running the coffee company and traveling the world, being invited as leading industry experts to speak and teach at various venues and events throughout the coffee world.

Nick started on TikTok in late 2019, and started posting videos as what would be known as "Your Korean Dad" in April of 2020. His audience has been growing rapidly ever since. Nick has two teenaged daughters.

Get yourself set for a great July 4 holiday weekend with an engaging, feel-good program with Your Korean Dad.

Producer and Host, Week to Week Political Roundtable; Vice President of Media & Editorial, The Commonwealth Club; Not Cool Enough to Be on TikTok—Co-Host 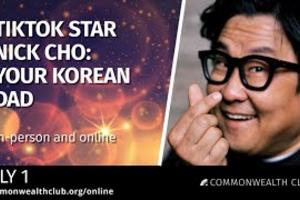