Ben Rhodes: After the Fall

After the Cold War, America sought to protect as many democracies as possible and stamp out any threat of authoritarianism around the world. Now, 30 years after the breakup of the Soviet Union, political scientists have observed a global rise in authoritarian governments—even in America itself. After the 2016 election of President Donald Trump, Ben Rhodes, a former White House aide and close confidant to President Barack Obama, sought to discover why nations have been opting for populism and tyranny over democracy.

In his new book After the Fall: Being American in the World We've Made, Rhodes documents his three years of world travel, speaking with politicians, activists, and dissidents confronting the same nationalism that has been tearing America apart. He says the acceptance of unrestricted capitalism after the Cold War, post-9/11 nationalism, mania for technology and media, and modern racism that Americans refuse to confront have all contributed to our nation’s faltering under authoritarian leadership.

With experience managing international conflict, Rhodes is an exemplary scholar in considering the global condition of humanity and how we can once again turn to democracy and equity. Join us for a look at where America has gone wrong and how essential it is to fight for what America is supposed to be.

This is an online-only program; please register for your link to the live-stream event.

Books available for purchase at checkout (U.S. domestic shipping only).

Former Deputy National Security Advisor to President Obama; Author, After the Fall: Being American in the World We’ve Made; Twitter @brhodes

In Conversation with Jennifer Palmieri

Former White House Communications Director; Co-Host, "The Circus" on Showtime; Author, She Proclaims: Our Declaration of Independent from a Man’s World; Twitter @jmpalmieri 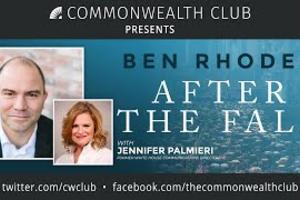 Ben Rhodes: After the Fall