A Conversation with Jake Tapper

CNN’s Jake Tapper is one of the most respected people in news today. As CNN’s chief Washington anchor and co-host of “State of the Union,” Tapper has sat down with presidents, covered inaugurations, and continues to interview senators, dignitaries and newsmakers week in and week out.

In his new novel The Devil May Dance, Tapper continues the story started in his previous bestseller, The Hellfire Club. Taking us into the world of political stars Charlie and Margaret Marder, Tapper re-creates the world of the 1960s, complete with backroom deals and secret societies. In this new journey, they befriend dazzling celebrities like Frank Sinatra and must learn to deal with sinister forces from Hollywood’s stages and the newly founded Church of Scientology.

Jake Tapper has covered historical political events such as the inauguration of President Barack Obama and the death of Osama bin Laden. His work has won him several awards, including an Emmy for Outstanding Live Coverage of a Current News Story and the Edward R. Murrow Award.

This is an online-only program; please pre-register to receive a link to the live-stream event. We welcome donations made during registration to support the production of our online programming.

Copies of The Devil May Dance are available for purchase at checkout. Purchased books will be sent to the address provided at checkout (domestic U.S. addresses only). 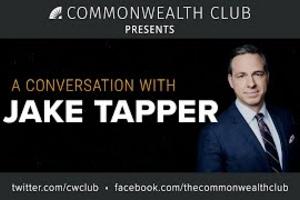 A Conversation with Jake Tapper