Shaw argues that if Robert Kennedy had been prosecuted for what Shaw calls his complicity in the death of Marilyn Monroe in 1962, his campaign against Mafia leaders as attorney general would have been sidetracked, and so there would have been no reason for Bobby’s Mafia enemies to assassinate his brother JFK in 1963. There would also have been no reason for them to kill media icon Dorothy Kilgallen, since it was her explosive investigation into JFK’s death that led to the famous reporter’s death in 1965.

Hear the details of Shaw's latest research, and send in your questions during the live-stream discussion.

Copies of Collateral Damage may be purchased during registration (for shipment to U.S. domestic addresses only).

Author, Collateral Damage: The Mysterious Deaths of Marilyn Monroe and Dorothy Kilgallen and the Ties that Bind them to Robert Kennedy and the JFK Assassination 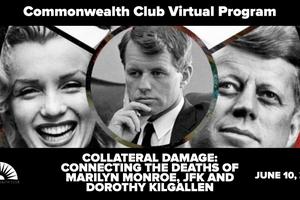