START Treaty Negotiator Rose Gottemoeller: How to Deal with Russia

One of President Biden’s first acts in office was to extend the New START Treaty with Russia. Concluded in 2010, the treaty cut the strategic nuclear arsenals of the United States and Russia in half. It was set to expire on February 5, 2021, and is now in force for another five years. That treaty—which is holding back a new nuclear arms race between the United States and Russia—was negotiated by Rose Gottemoeller, former U.S. under secretary of state and former deputy secretary general of NATO.

But now, what comes next—in arms control and in dealing with Russia? Fueled by petro-rubles, a stronger economy has enabled the Russians to fund a decade of investments in high-tech nuclear and conventional weapons, including cybermeasures targeting the internal information systems of the United States and other countries. How should the United States respond to those threats, and to possible new opportunities for cooperation with Russia? What dangers, and opportunities, are presented by flash-points like the recent Russian military presence on the Ukrainian border?

What was it like to negotiate a major nuclear arms control treaty with the Russians, to get Presidents Obama and Medvedev to agree to it, and then negotiate its ratification through the U.S. Senate, at one of the most deeply partisan times in American history? Importantly, how did Republicans and Democrats come together to ratify a treaty to safeguard the future of all Americans?

Please join our CEO, Dr. Gloria Duffy, for a conversation with Rose Gottemoeller, on the eve of the first summit meeting between Presidents Biden and Putin. Deputy Secretary General Gottemoeller and Dr. Duffy have worked together on a number of occasions, including on dismantling weapons of mass destruction in the former Soviet countries during the Clinton administration.

This is a free, online-only program; please pre-register to receive a link to the live-stream event. We welcome any donations made during registration to support the production of our online programming. 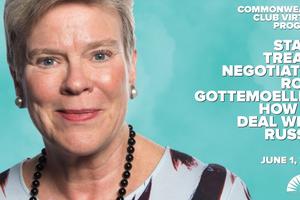 START Treaty Negotiator Rose Gottemoeller: How to Deal with Russia