AAPI Heritage Month Special “WOMEN我們: From Her to Here"

Join us for an AAPI Heritage Month special program in partnership with the Chinese Culture Center. We'll speak with the curator and artists of “WOMEN我們: From Her to Here,” the exhibit exploring artwork focused on the Asian diaspora. gender diversity and sexual equality. All artists are of diverse gender and sexual identities from across the Bay Area, Taiwan, Hong Kong, China and more.

Heesoo Kwon is a visual artist and anthropologist from South Korea currently based in the Bay Area, California. Kwon initiated an autobiographical feminist religion, Leymusoom, in 2017, which mines the depths of personal cosmologies and Korean shamanism to sculpt a virtual confessional space of deep introspection. Kwon received her Masters of Fine Art from UC Berkeley in 2019. Her work has been the subject of a solo exhibition at Et Al and Studio 2W in San Francisco, Phoebe A. Hearst Museum of Anthropology in Berkeley, and CICA Museum and Visual Space Gunmulsai in South Korea. She has participated in group exhibitions at the CICA Museum; BAMPFA, Berkeley; Root Division, San Francisco; SOMArts, San Francisco; Embark Gallery, San Francisco; and Slash Gallery, San Francisco, among others. In 2012 Kwon received the Female Inventor of the Year Award from the Korean Intellectual Property Office. Her other accolades include the Young Korean Artist Award from the CICA Museum, the finalist of the 20th Seoul International ALT Cinema & Media Festival, and the Roselyn Schneider Eisner Prize for Photos and Art Practice from UC Berkeley.

Hoi Leung is a San Francisco-based curator with a deep sensitivity to neighborhood dynamics in her curatorial approach. As the Chinese Culture Center’s curator, she has led exhibitions, public art interventions, and multi-year community-based projects. She recently curated "WOMEN我們: From Her to Here" (2021), a multidisciplinary group exhibition exploring queer belonging and agency within the Asian diaspora. Hoi’s other recent curatorial projects include: "Art, Culture & Belonging" (2020), a collaborative project by Christine Wong Yap exploring belonging and resiliency in San Francisco’s Chinatown and Manilatown; "Task of Remembrance" (2020)—a multidisciplinary exhibition inspired by the 30th anniversary of the global, cultural, and political upheavals of 1989; and "Homing" (2020), a site-specific solo exhibition by Taiwanese sound artist Hung Tzu Ni inspired by San Francisco unique urban history. Hoi is also a 2019 Asian Cultural Council Fellow and has traveled to Hong Kong, Taiwan and Vietnam at the invitation of art institutions.

Madeleine Lim is the founding executive/artistic director of the Queer Women of Color Media Arts Project (QWOCMAP). As one of a small number of queer women of color filmmakers on the international film festival circuit in the late '90s, she saw that only queer women of color would tell their own authentic stories. Decades ahead of mainstream conversations about gender and racial equity in film, she founded QWOCMAP in 2000. Her belief was that a community of filmmaker-activists could change the craft of filmmaking and the leadership of social justice movements. Under Madeleine’s leadership, QWOCMAP’s award-winning Filmmaker Training Program has nurtured the creation of more than 450 films, the largest catalog of LBTQ+ BIPOC films in existence. Lim is an award-winning filmmaker with more than 25 years of experience as a producer, director, cinematographer, and editor. Her films have screened at sold-out theaters at international film festivals around the world, including the Vancouver International Film Festival, Mill Valley Film Festival, and Amsterdam Amnesty International Film Festival. Her work has been featured at universities and museums, and broadcast to millions on PBS. Her film Sambal Belacan in San Francisco (1997) remains banned in Singapore.

Nicole Pun is a visual artist based in Hong Kong. She uses photography, video, and performance to explore queer identity, desire and female representation. Her artistic practice involves collaborations and interviews with strangers. She received her MFA from the California Institute of the Arts in 2014. She has a BSSc from the Chinese of University of Hong Kong, with a background in journalism and communication. Her work has been exhibited in Circus Gallery and Avenue 50 Studio in Los Angeles; SOMArts Cultural Center in San Francisco; McGroarty Arts Center in Tujunga; and “In & Out” Nicole Pun Solo Exhibition at Lumenvisum in Hong Kong. She is the recipient of a number of grants and awards, including the Yale-China Arts Fellowship, Emerging Artists Scheme of Hong Kong Arts Development Council, WMA Masters Special Mention Award and First Prize of Chiquita Canyon landfill art competition.

Presented in association with the APA Heritage Foundation. 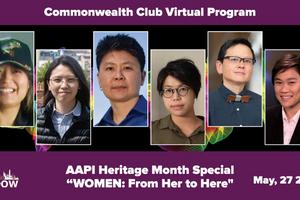 AAPI Heritage Month Special “WOMEN: From Her to Here"