Join us for an exploration of a side of the Vietnam War that is little known in the United States. Learn about the unexploded ordnances left behind after the United States withdrew from the war, and hear about the "Secret War" in which people from Laos, Cambodia and Vietnam fought alongside American troops.

Sera Koulabdara serves as executive director of Legacies of War, the only international educational and advocacy organization based in Washington, D.C. Legacies of War is working to address the impact of conflict in Laos during the Vietnam War-era, including removal of unexploded ordnance (UXO) and survivor assistance. Prior to this role, Sera was a long-time volunteer and served on Legacies’ board for four years in multiple leadership positions, including vice chair. Under Sera’s leadership, U.S. funding for UXO clearance in Laos reached $40 million for 2021—the highest level in history—and the Legacies of War Recognition and UXO Removal Act was introduced by Senator Tammy Baldwin. If approved, this historic bill will recognize the people of Laos, Cambodia, and Vietnam who fought alongside American troops during the Vietnam War and authorizes landmark funding of $100 million for five years divided among the three countries of Laos, Cambodia, and Vietnam.

Khao Insixiengmay is a former Royal Lao Army Colonel who received military training in Laos, France and in the United States. He was recruited by the CIA and fought in Military Region 3 for six years, and fought all over Laos.

David Phommavong is a father, husband and son of a Secret War veteran, the late Keosond Phommavong of SGU Scorpion Unit. He is the co founder of Laotian American National Voice (LAN-V), co-chair of LAN-V Secret War Veteran’s Benefit, and Lao Global Heritage Alliance Board of Director. Phommavong is an advocate and a community activist. He and his wife have a private charity, Nourish Lao Children, through which they provide financial and educational support to impoverished children in Lao PDR.

Thomas Leo Briggs is retired from the U.S. federal government after 32 years of service. He spent three years in the U.S. Army with one year in Vietnam as a military police platoon leader, three years in the Drug Enforcement Administration as a special agent, and 26 years in the CIA as an operations officer. He entered duty with the CIA in 1969. His first assignment was as a special operations case officer in Laos from 1970 to 1972. During that assignment, he directed all small team special operations in Military Region IV in southern Laos. He published a book in 2009, Cash on Delivery: CIA Special Operations During the Secret War in Laos, which describes his experiences fighting the Secret War in cooperation with the Royal Lao Government against the North Vietnamese Army invaders of the Kingdom of Laos.

Michelle Meow
Producer and Host, "The Michelle Meow Show," KBCW/KPIX and Podcast; Member, The Commonwealth Club Board of Governors—Host
Format 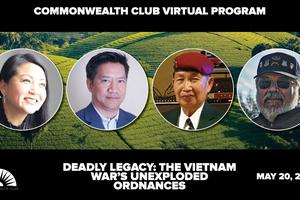