The stories are horrifying and heart-breaking. An 84-year-old Thai immigrant in San Francisco died after being violently shoved to the ground during his morning walk. In Oakland, a 91-year-old senior was shoved to the pavement from behind. An 89-year-old Chinese woman was slapped and set on fire by two people in Brooklyn, New York. A stranger on the New York subway slashed a 61-year-old Filipino American passenger's face with a box cutter. The only Asian American lawmaker in the Kansas legislature says he was physically threatened in a bar by a patron who accused him of carrying the coronavirus.

The advocacy group Stop AAPI Hate says it has received more than 2,800 nationwide reports of hate incidents directed at Asian Americans since the pandemic began. More than 6 million Asian Americans live in California, by far the most in any U.S. state. Of those reports, 1,226 incidents took place in California, and 708 in the Bay Area alone. The majority of incidents in the Bay Area—292—took place in San Francisco, followed by San Jose (58) and Oakland (55). Last week, the U.S. Senate overwhelmingly (94 to 1) approved bipartisan legislation aimed at strengthening federal efforts to address hate crimes directed at Asian Americans.

What should all of us know about these hate crimes and the steps we each can take to prevent them? Join KQED's Mina Kim; David Mineta, noted mental health advocate and son of former congressman and Transportation Secretary Norman Mineta (who was in a Japanese-American internment camp during World War II); business leader Anna Mok;  Muhammed Chaudhry, president of Ahmadiyya Muslim Community, Silicon Valley; and moderator Michelle Meow for a compelling discussion of next steps, based on their personal and professional perspectives.

In association with Ascend, the largest nonprofit pan-Asian membership organization for business professionals in North America.

Anna Mok
President and Co-Founder, Ascend; Partner, Deloitte and Touche, LLP; Board Member and Former Board Chair, The Commonwealth Club of California

Michelle Meow
Producer and Host, "The Michelle Meow Show" on KBCW/KPIX and Podcast; Member, Commonwealth Club Board of Governors—Moderator
Format 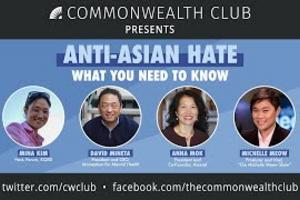