The United States is the world’s leader in incarceration. “Tough on crime” attitudes in the 1980s have shaped the policies that criminalize more people in the United States now than ever before. With this carceral approach, the United States must deal with consequences such as overcrowding, prison violence and unnecessary fiscal burdens. Philadelphia District Attorney Larry Krasner has spent 30 years learning about America’s carceral system as a civil rights and criminal defense lawyer, and his goal is to transform the system from the inside out.

When he first launched his campaign for district attorney of Philadelphia, progressive Krasner seemed unlikely to win the seat so long-held by “tough on crime” attorneys who helped turn Philly into a city with one of the highest rates of incarceration in the country. But with perseverance to create a radical reform plan, Krasner won the DA election by a margin of nearly 50 percent. In his new book For the People, Krasner takes readers on his lifelong journey through election precincts and courtrooms all the way up to his swearing-in ceremony to see how what he calls our system of injustice was built and how we might dismantle it. ​​​​​​

Join us as Larry Krasner asks us to confront the ills of the criminal justice system and pioneers one of the most important civil rights movements of our time.

Copies of For the People are available for purchase during registration (for shipping to U.S. domestic addresses only).

Larry Krasner
District Attorney, Philadelphia; Author, For the People: A Story of Justice and Power 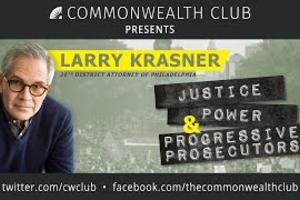