Inside the Adachi Project

Join us for an inside look at The Adachi Project, a first-of-its-kind storytelling initiative that spotlights powerful stories and unseen perspectives of the U.S. criminal legal system via compelling documentary film, video and photojournalism.

Following an introduction to The Adachi Project by Mano Raju and Santhosh Daniel, we'll view one of the films from the project and feature a discussion with the people involved.

Mano Raju is the public defender of San Francisco, whose office founded The Adachi Project in partnership with Compound and Even/Odd. He completed his undergraduate work at Columbia, holds a Master’s degree in South Asian Studies from UC Berkeley, and earned his law degree at UC Berkeley Law. After beginning his public defender career as a deputy public defender in Contra Costa County, he joined the San Francisco office in 2008 as a line deputy and went on to become the training director and then the felony manager. Known as a fierce litigator, Raju has lectured on winning homicide cases, winning gang cases, and race-conscious representation. He believes in the importance of client connection through family-based representation and holistic community-based empowerment strategies.

Santhosh Daniel, a founding partner of The Adachi Project, is a writer, producer and creative communications strategist specializing in arts, media and impact initiatives. He is founder of the creative strategies group Compound and co-founder of First Kitchen Media, a media equity initiative with original documentary productions in food. His most recent work includes "Open Account," a podcast produced with Slate Group Studies featuring personal stories about money; and "Bloodline," a short film currently airing on PBS about the generational impact of war on family and food culture. Daniel's’s professional experience includes The Global Film Initiative and work with the Smithsonian, Medium, Virgin America, Umpqua Bank, Oakland Museum of California, Bill & Melinda Gates Foundation and the U.S. Department of State, and he has served on the board of directors of California Humanities and currently serves on the board of Found Sound Nation, a music innovation and diplomacy organization. He has a B.A. in English from the University of Washington and a M.F.A. in English from the University of Iowa Writers’ Workshop.

Mohammad Gorjestani, a founding partner of The Adachi Project, is an Iranian-born filmmaker and creative director who grew up in the underbelly of Silicon Valley. His films have earned recognition including the Grand Jury Prize at SXSW, The Tribeca “X” Award, 6 Webby Awards and Vimeo "Video of the Year." He is a founder of the creative studio Even/Odd.

Hadi Razzaq is a managing attorney at the San Francisco Public Defender’s Office. He has worked as a public defender for 17 years and has conducted more than 45 jury trials. A core member of The Adachi Project team, Razzaq is deeply committed to fighting the inequities in the criminal legal system, and elevating the voices of the public defender’s clients, their families and communities. Razzaq completed his undergraduate studies at Emory University, and obtained his Juris Doctor at the University of California, Berkeley School of Law. He has served as a board member of the South Asian Bar Association of Northern California, and currently serves on the Bar Association of San Francisco’s Criminal Justice Task Force and on the board of the Coalition on Homelessness.

Carolyn Ji Jong Goossen is the SF policy director with the San Francisco Public Defender’s Office and a leading member of The Adachi Project. She has extensive experience fighting for criminal justice systems change, LGBT rights and immigrant rights. In her current role, she works to harness the power of the press and community organizing to win tangible changes for public defender clients, their families and communities. Prior to working for the public defender she was chief of staff to Supervisor Hillary Ronen on the San Francisco Board of Supervisors, where she helped draft legislation to create Mental Health SF and to close San Francisco’s Juvenile Hall. She is a queer mother of two and the daughter of immigrants.

William M. Palmer II (Tariq) is a criminal justice advocate and former resident of the 111 Taylor Reentry Center. He is a committee member for San Francisco Reentry Sentencing Commission, Direct Services, and co-leader of the Subcommittee on Legislation, Policy & Practices. He’s the communications fellow for Legal Services for Prisoners with Children and the CEO and co-founder of Life After Next.

This is a free, online-only program; please pre-register to receive a link to the live-stream event. We welcome donations made during registration to support the production of our online programming.

Producer and Host, "The Michelle Meow Show," KBCW/KPIX and Podcast; Member, Commonwealth Club Board of Governors—Host 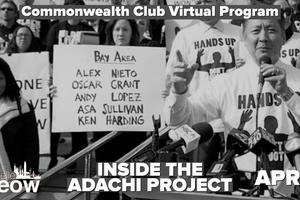 Inside The Adachi Project