We'll begin our program sharing war stories from Lao veterans who fought in the secret war. We'll also discuss AB1393, an effort to include Lao history and cultural studies in CA's K-12 curriculum, starting a fish sauce business, and "nung pee"—Lao horror films with the only female film director in Laos.

The evening will end with a special performance by Lookthung/Morlam Esan singer Tookta.

David Phommavong is a father, husband and the son of a Secret War veteran, the late Keoson Phommavong of SGU Scorpion Unit. Co Founder of Laotian American National Voice (LAN-V), Co Chair of LAN-V Secret War Veteran’s Benefit, and Lao Global Heritage Alliance Board of Director. David is an advocate and a community activist. David and his wife have a private charity Nourish Lao Children where they provide financial / educational support to impoverished children in Lao PDR.

Chantho Vorasarn, former Royal LAO Armed Forces Major (1972), 11 year POW (1975-1986) after US pull out from VN and communist took over Laos. Fled to to Thailand in 1986 and resettled in the USA in August 1987 (St.Petersburg, FL). Retired High School Teacher in 2013 and presently residing in Pinellas Park Florida as Chairman of the Board of Director of the LAO Arts and Cultural Foundation of Florida, Inc. and Associate Director of the United Royal LAO Armed Forces & Special Guerrillas Units Veterans, Inc. (URLAF&SGU). Vice Chair of Laotian American National Voice, Secret War Veteran’s Benefits Subcommittee.

Khambang Sibounheaung joined the Royal Army in 1960. In 1961 he was recruited into the Secret War, where he was wounded twice, captured and spent 8 months in hard prison 1964. He immigrated to USA in December 1975, where he spent 4 years teaching World Cultural, worked 15 Years worked for Metro Government in Nashville as Court Officer, spent 11 Years With Tennessee Military Department as LTC TNSG As a Battalions Commander, and 5 years with NUSC as Major General. He was promoted to Lieutenant General in 2013 By Admiral Carlos Martinez. He is a member of the RLA Committees since 2006. He is also the skydiving team Jump Master and has jumped in many Countries around the world, i.e France German and U.S. LTG Khambang over 20 International Wings. He is currently, Vice Chair of Laotian American National Voice, Secret War Veteran’s Benefits Subcommittee.

Alex Sirivath is the Founder & CEO of Sirivath Corporation (Ninja Foods), a food manufacturing company producing instant Lao papaya salad sauce. She is a first generation refugee from Laos and a self-made entrepreneur. Her company established the very first nationally branded instant Lao papaya salad in the US. Before the founding of Ninja Foods in 2016, she held various positions at Walmart Stores Inc and Tyson Foods Inc. Alex holds a Bachelor's Degree in Information Technology from the University of Arkansas. In her spare time, she enjoys singing, spending time with family, traveling and having deep conversations with her wife over drinks. She is part of the Lao Food Movement, an organization aimed to put Laos on the map by sharing Lao Food and Culture.

Bobbie Oudinarath is a key founding member and the Communications Director for Lao Advocacy Organization of San Diego (LAOSD). The organization is a grassroots non-profit, volunteer and community-based organization with a mission to inspire and empower Laotian Americans through education, active engagement in civic and public affairs. The organization is made up of passionate Laotian American leaders in San Diego dedicated to making positive, impactful and lasting changes for the community. LAOSD is most known for originating and getting unanimous California Legislative support for Assembly Bill 1393 (AB1393). The bill’s purpose was to include Laotian history and cultural studies in California’s K-12 Curriculum.

Ms. Oudinarath lives in La Jolla with her husband Steve and sons Michael and Samuel. She has lived in San Diego for over twenty-six years and hold key leadership positions with many organizations in the community to support diversity and inclusion and foster growth for San Diego and California. In addition to her role with LAOSD, she serves as a Board of Director for the Asian Business Association, is a Board of Director for the Union of Pan Asian Communities, is a key founding member of the Pineapple Club (women empowerment). serves as a Senior Advisor to SD Lao Heritage, has been involved with the Lao Lue Cultural Heritage, and served as the Communications Director of Tsunami dragon boat racing team.

In addition to community service, Ms. Oudinarath has a successful career of over twenty-one years with strong market leadership and proven track record in the financial services arena. She works as a Vice President and Area Manager for JP Morgan Chase & Co’s business banking in San Diego, California where she has consistently led her team to earn the highest distinction annually of “National Achiever”. Ms. Oudinarath was a recipient of the “Chase Champion” award, the highest honor for leadership and commitment to employee excellence from the firm. Recently, Ms. Oudinarath was honored with “The Patriotic Employer” by the Office of Secretary of Defense for her work supporting Veterans transition and development into the work force.

Ms. Oudinarath is equally passionate about diversity and inclusion in the work place and serves at her firm as a JPMorgan Chase Brand Ambassador, served as the California’s Business Banking Diversity Action Group Representative, is a board member of the Volunteer Leadership Group, is the Market Leadership Team’s (MLT) Business Liaison to the Business Resource Groups, serves on the MLT’s Networking and Community Engagement Subcommittees. Lastly, she is actively engaged as a member of Women on the Move, Adelante, and Aspire.

Ms. Oudinarath is a graduate of the University of San Diego, California with a Bachelor of Science in Psychology and Biochemistry with Minors in History and Economics with additional education and advanced certifications in the financial services and banking arena.

Tookta is a famous Thai Molam (folk, country) singer. She started singing at the tender age of 12 years old. Her sound and genre is specific to the Esan region of Thailand. She has performed for an audience of over 100k on Mother's Day for Thailand's Queen. In addition to a successful career as a Molam singer,Tookta has also performed as a popular stand up comedian.

The celebration is made possible by Ali Polly & Associates: Financial education, information, and empowerment. 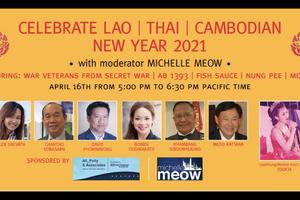