Alice Gu: The Rags to Riches Story of the Donut King

The real-life tale of Ted Ngoy, "the Donut King," is one of fate, love, survival, hard knocks, and redemption. It's the rags to riches story of a refugee escaping Cambodia, arriving in America in 1975 and building an unlikely multi-million-dollar empire baking America's favorite pastry, the donut. He sponsored hundreds of visas for incoming refugees and helped them get on their feet teaching them the ways of the donut business.

His life has been turned into the documentary The Donut King by award-winning filmmaker Alice Gu. A Los Angeles native, Gu began her career as a director of photography, working with renowned directors Werner Herzog, Stacy Peralta, and Rory Kennedy, among others. Her commercial clients for print and live action include TBWA/ Chiat Day, Media Arts Lab, Deutsche, Edelman, Berlin Cameron, Cole & Weber, Pereira & O’Dell, Doremus, Publicis, Beats by Dre, Laird Hamilton, ESPN, FIFA, NFL, NHL, NBA, the WSL, Apple, Peta, and the American Humane Association. Take Every Wave: the Life of Laird Hamilton made its premiere at the Sundance Film Festival in 2017, a documentary film directed by Academy Award nominated director, Rory Kennedy, and lensed by Alice Gu.

The Donut King is Alice’s feature directorial debut; it was slated to premiere in the canceled 2020 SXSW film festival. Despite the cancellation, the film won the Special Jury Prize for Excellence in Documentary Storytelling, as well as the One in a Million Award at the canceled 2020 Sun Valley Film Festival and the Grand Jury Prize at the Bentonville Film Festival. A feature-length documentary about the rise and fall of a Cambodian refugee turned donut tycoon, The Donut King is executive produced by Academy Award-winners Ridley Scott and Freida Lee Mock.

Join us for a discussion with Alice Gu.

Please note: this is a film discussion, not a screening of the film.

Filmmaker, The Donut King and Take Every Wave: The Life of Laird Hamilton 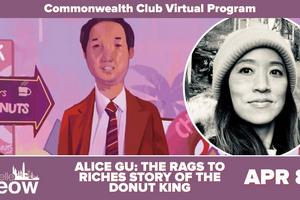 Alice Gu: The Rags To Riches Story of the Donut King