Ethan Russell is a multi-Grammy nominated photographer and director, and was the tour photographer for The Rolling Stones on the 69 Let it Bleed tour. Russell was almost literally on the last chopper out of the Sixties (as the story goes) when he was airlifted with The Rolling Stones from Altamont in the far East Bay of San Francisco.

These moments and many more fill the pages of Russell's recently released career retrospective Best Seat in the House, a 200+ page coffee table photography book. The beautiful book includes rare and iconic images of The Beatles, Rolling Stones, The Who, The Doors, The Eagles, Janis Joplin, Jimi Hendrix, James Taylor, Steve Winwood and many, many more.

Please join us for an intimate conversation and special interactive presentation with Russell. If you like rock and roll or photography, it's a program you don't want to miss.

Ethan Russell was born on November 26, 1945, in Mount Kisco, New York, and moved to San Francisco in the early 1950s. The multiple Grammy-nominated photographer, author, and director is the only photographer to have shot album covers for The Beatles, The Rolling Stones, and The Who. Just a boy from California, Russell was barely established when he took his first pictures of Mick Jagger; he became one of the foremost rock photographers in the world only a few years later. A pioneer in music video, he is an award-winning creative director and the author of three previous books: Dear Mr. Fantasy, Let It Bleed: The Rolling Stones 1969 U.S. Tour, and Ethan Russell: An American Story.

To learn more about how to purchase Ethan Russel's books, visit his website. 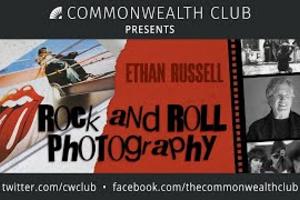