The National Rifle Association is widely considered to be one of the most influential—and arguably most controversial—interest groups in America. In its infancy, the NRA operated as a nonpartisan organization for gun owners to learn firearm safety, practice marksmanship and shoot for recreation. The organization has expanded into a political powerhouse since then. Despite existing in an era where mass shootings and other gun-related deaths provoke public outcry, the NRA still manages to exert its power and consistently defeat proposals for gun restrictions.

In his new book Firepower, political researcher Matthew Lacombe seeks to understand how the NRA came to be this powerful. Drawing on nearly a century of archives and records, Lacombe discovers that the NRA has fashioned a distinct pro-gun worldview among its supporters to influence their political actions and mobilize them when necessary. He says the NRA has used its large, unified and active base to secure an alliance with the Republican Party and ensure its political objectives are advanced. Lacombe sheds new light on how the NRA has grown powerful by mobilizing average Americans, and how it uses its GOP alliance to shape the national agenda and maintain political power.

Join us as Matthew Lacombe discusses Firepower and reveals how the NRA has turned its once-nonpartisan membership into modern political pawns.

Copies of Firepower are available for purchase during checkout. Purchased books will be sent to the address provided at checkout (domestic U.S. addresses only).

In Conversation with John Boland 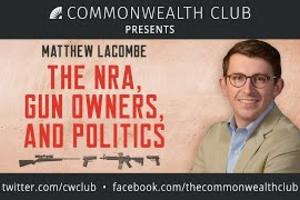