Join us for a virtual discussion with Fatima Shaik about New Orleans' vibrant and singular French-speaking Creole culture.

Statistics show that for the first four decades of the 19th century, almost half of the city’s Black people were free. This compares to only 14 percent nationwide prior to 1865. In the face of an oppressive white society, though, members of the Société d'Economie et d'Assistance Mutuelle built a community and held it together throughout the era of slavery, the Civil War, Reconstruction, and Jim Crow terrorism. Shaik reconstructs the Economy Hall culture by following Ludger Boguille, and his family and friends, through landmark events—from the Haitian Revolution to the birth of jazz—that helped shape New Orleans and the United States.

Based on a century's worth of handwritten journals, which Shaik's father rescued from a trash hauler's pickup truck, the story that emerges from those journals' pages reveals one of the most important multiethnic, intellectual communities in the U.S. South: educators, world-traveling merchants, soldiers, tradesmen, and poets. Although Louisiana law classified them as men of color, Negroes, or Blacks, the Economie brothers rejected these racial distinctions, and their implied racism and colorism, to fight for suffrage and education rights for all.

Shaik, a direct descendant of an Economy Hall member, has constructed a meticulously detailed narrative of New Orleans' unique history.

Copies of Economy Hall may be purchased during checkout (for shipment to U.S. domestic addresses only). 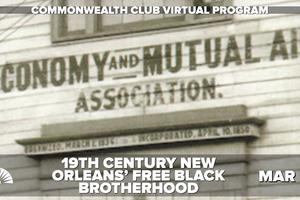