African Americans currently make up 5 percent of San Francisco's population but also comprise nearly 40 percent of its homeless residents. African Americans are also reported to have the city's highest mortality rates and lowest median household incomes, along with a disproportionately high percentage of police use-of-force incidents.

To improve these conditions, based on recommendations from a community engagement process led by the San Francisco Human Rights Commission, San Francisco Mayor London Breed and Board of Supervisors President Shamann Walton have proposed a budget that will enact "transformative change" and spur investment in the AfrIcan-American community. The budget will redirect $120 million from law enforcement agencies and into programs that support the city’s Black community. These funds would go toward initiatives expanding mental health and wellness and reducing homelessness in the Black community; supporting education, youth development and economic opportunities; and developing a plan to replace police officers with social workers as the main responders to noncriminal calls involving the homeless and mentally ill.

Join an important discussion about the current state and future of San Francisco's African-American community.

Held in association with INFORUM.

President, San Francisco Board of Supervisors 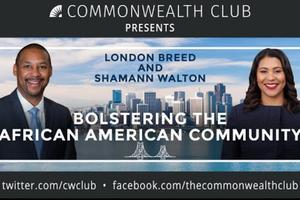