Thanks to developments in genetic medicine, for the first time we have the ability to predict our genetic future, to diagnose and prevent disease before it begins, and to decode what it really means to be human. Since the Human Genome Project was completed in 2003, the possibilities for genetic medicine have only grown. But what does the human genome and genome sequencing mean for citizens today, and what will it mean for health care over the next several decades?

In his new book, The Genome Odyssey, Dr. Euan Ashley answers some of the questions by detailing the medicine and science behind genome sequencing, introducing a dynamic group of researchers and medical investigators who hunt for genetic answers, and bringing forward pioneering patients who open up their lives to the medical community during their search for diagnoses and cures for inherited diseases. Ashley describes how he led the team that was the first to analyze and interpret a complete human genome, how they broke genome speed records to diagnose and treat a newborn baby girl whose heart stopped five times on the first day of her life, and how they found a boy with tumors growing inside his heart and traced the cause to a missing piece of his genome.

Dr. Ashley and his team, and a small number of others around the country, are currently working to expand the boundaries of our medical capabilities and to envision a future where genome sequencing is available for all, and where medicine can be tailored to treat specific diseases before they show symptoms and to decode pathogens like viruses at the genomic level.

Please join us as Dr. Euan Ashley talks about revolutionizing health care and the future of medicine by continuing to unlock the secrets of the human genome.

Euan Ashley is a professor of medicine and genetics at Stanford University. He was born in Scotland and graduated from the University of Glasgow. He attended Oxford University, completing a Ph.D. there before moving to Stanford University, where he trained in cardiology. He joined the Stanford faculty, where he led the team that carried out the first medical interpretation of a human genome. Ashley has received awards from the National Institutes of Health and the American Heart Association. He was recognized by the Obama White House and received the Medal of Honor from the American Heart Association. His articles have appeared in the many journals, including Lancet, The New England Journal of Medicine, The Journal of the American Medical Association, Nature and Cell. He appears regularly on local and national radio and TV. He is the founder of three companies and advisor to several Silicon Valley companies.

This is a free, online-only event; you must pre-register to receive a link to the live-stream program. We welcome donations made during registration to support the production of our online programming.

In Conversation with Anne Wojcicki
CEO and Co-Founder, 23andMe
Format 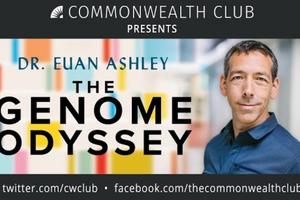