After World War II, a newly affluent United States searched for its own gourmet culture. In James Beard, whose larger-than-life presence would rule over kitchens and dinner tables for the next 35 years, America found its culinary maestro. How did this secretly queer failed opera singer from the epicurean backwater of Oregon become America’s first food celebrity? John Birdsall tells the tale in his new book The Man Who Ate Too Much: The Life of James Beard, bringing to life a towering figure, a man who still represents the best in eating and yet has never been fully understood—until now.

Join us for an in-depth conversation with Birdsall, who will look beyond the public image of the celebrated cean of American cooking to find a man who battled depression, self-doubt, loneliness, and the complex rules of the closet to become a beloved household name synonymous with fine cooking and the good life. Producing nearly two dozen cookbooks in his lifetime, Beard was staunchly unfussy and proudly anti-elitist, embracing the elegance and pleasures of pure, local food and “humble, everyday cooking that aims for simplicity, honors flavor over dubious thrift, and achieves perfection using fine ingredients.” His influence on American food culture cannot be overstated: he was the definitive source of knowledge and inspiration for American home cooks in the 20th century, and the inspiration for a new generation of restaurant chefs in the 1970s, including Larry Forgione, Jeremiah Tower, and Alice Waters.

Our special guest, John Birdsall, is himself a two-time James Beard Award-winning author, a former food critic and a longtime restaurant cook. He co-authored (with James Syhabout) the cookbook Hawker Fare.

This is an online-only presentation; pre-register to receive a link to the live-stream event. 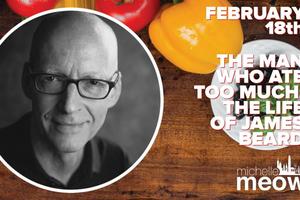