Walter Mosley, the author of more than 60 critically acclaimed books, is one of the most admired writers in America. The Commonwealth Club is pleased to welcome Mosley for the first time for a discussion on this new book, Blood Grove, and his long career in writing and the arts. just as America continues its reckoning on race relations.

Last year marked the 30th anniversary of Mosley's legendary Easy Rawlins series, as well as Mosley’s three decade-long exploration of racial inequality, political corruption and the pursuit of justice. In early February, Mosley's infamous detective, Rawlins, is back in Blood Grove, the 15th entry in the mystery series. Readers around the world have followed Easy Rawlins, an unlicensed private investigator turned detective always willing to do what it takes to get things done, in books translated into more than 25 different languages. Mosley's1990 debut novel, Devil in a Blue Dress, was the first in the bestselling mystery series featuring Rawlins and launched Mosley into literary prominence.

Mosley, who was just awarded the National Book Foundation's prestigious Lifetime Achievement Award, and the first Black man to win the honor in its 32-year history, has been astutely and profoundly engaging with the politics of race, the realities of being Black in America, and elegantly pushing the boundaries of genre fiction throughout his storied career. Mosley’s books have won numerous awards, including, but not limited to, an Edgar Award for Down the River Unto the Sea, an O. Henry Award, The Mystery Writers of America’s Grand Master Award, a Grammy, several NAACP Image awards, and PEN America’s Lifetime Achievement Award. In 2020, he was named the recipient of the Robert Kirsch Award for lifetime achievement from the Los Angeles Times Festival of Books.

Please join us for this special event.

This is an online-only program; pre-register to receive a link to the live-stream video.

Copies of Blood Grove are available for purchase at checkout (U.S. domestic shipping only); our thanks to Marcus Books for fulfilling book orders. 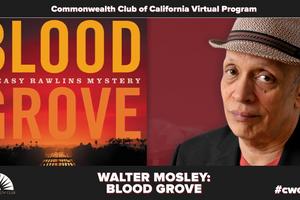