Hoover Institution Senior Fellow and Stanford University Political Science Professor Larry Diamond is a renowned expert on democracy around the world. In late November of last year, he penned a New York Times essay that said, "The vulnerability of our democracy today doesn’t come in the form that many feared when Donald Trump was elected in 2016. The good news is that two of the three pillars of American democracy—liberty and the rule of law—endure, even if they have been battered. But the third pillar—free and fair elections—is under far more direct threat than my fellow democracy experts predicted."

Dr. Diamond went on to predict that President Trump "might pressure the Republican legislatures in battleground states, like Pennsylvania and Florida, to award him their state’s electors, even if the formal vote-counting machinery ultimately declares a Biden victory in the state. . . . [S]uch a scenario would be far more dire and polarizing than even the Bush v. Gore nightmare of 2000, with an incumbent president threatening fire and brimstone if the election were not handed to him, while signaling violent right-wing extremists to 'stand by' but perhaps no longer 'stand down.' "

Dr. Diamond says our democratic electoral system, unlike others in the world, "has no comparable standing authority to investigate national-level corruption, and Congress largely investigates and punishes itself." He says that newer democracies have also taken measures to depoliticize their equivalent of a supreme court, including term limits and a broader consensus on court nominees. But, says Dr. Diamond, none of this occurred to America's founders, and while "throughout most of our history, America’s democratic norms have been strong enough and the outcomes have been clear enough to avoid catastrophic conflict over a national election," that might not be true anymore.

Come for an important discussion on what changes may be needed in America's institutions in order to preserve our Democracy.

In Conversation with Dr. Gloria Duffy
Ph.D., President and CEO, The Commonwealth Club of California
Format 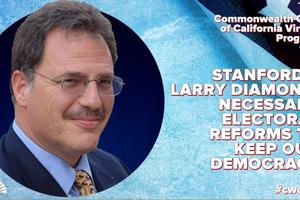