Martin Luther King, Jr., Malcolm X, and James Baldwin pioneered equality through their common virtues of faith and resilience. They changed the minds of many Americans through their ability to assess community knowledge and make it accessible to the masses.

These men were not born with this innate ability to lead; they were shaped by their surroundings and upbringing to fight for social justice. Much has been written about Baldwin, Dr. King, and Malcolm X, but virtually nothing has been said about the extraordinary women who raised them to be the leaders they became.

Join us in conversation with Anna Malaika Tubbs as she celebrates Black motherhood in her new book, The Three Mothers. Baldwin's mother Berdis, King's mother Alberta, and Malcolm X’s mother Louise raised their sons with the hope of helping them to survive in a society that would deny their humanity from the very beginning. Louise’s reminders of the family’s activist roots, Berdis’ encouragement of creative writing, and Alberta’s concentration on faith were integral to each of the men’s outlook on life. The Black mothers who raised America’s most pivotal heroes each represent a piece of history left untold and a celebration of Black motherhood long overdue.

This is an online-only program; pre-register to receive a link to the live-stream video

Copies of The Three Mothers are available for purchase at checkout (U.S. domestic shipping only); our thanks to Marcus Books in Oakland for fulfilling book orders

Author, The Three Mothers: How the Mothers of Martin Luther King, Jr., Malcolm X, and James Baldwin Shaped a Nation 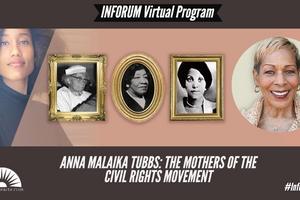