Women in politics must face an inevitable wall of sexism and gender stereotypes by the public, all in addition to the political and economic responsibilities of their position. Former Australian Prime Minister Julia Gillard and Nigerian economist Ngozi Okonjo-Iweala come from two different political atmospheres, yet have the ability to build common ground on their shared gendered experiences.

Gillard and Okonjo-Iweala are former political leaders with years of expertise as women in government spaces. In 2010, Gillard became the first female prime minister of Australia. She spent her time in office focusing on rebuilding the Australian economy and prioritizing national health initiatives. Okonjo-Iweala is a Nigerian economist and international development expert who has 25 years at the World Bank as a development economist under her belt. She has also served two terms as the finance minister of Nigeria and the minister of foreign affairs. Throughout their separate careers, these women have explored the political gender bias that ultimately leads to an important question: why aren't there more women in national leadership roles?

In their new book, Women and Leadership: Real Lives, Real Lessons, Gillard and Okonjo-Iweala attempt to answer this question by analyzing the lived experience of the world's most powerful women, including Jacinda Ardern, Hillary Rodham Clinton, and Christine Lagarde. This honest book on leadership equality aims to have readers question the role of gender and sexism in the political arena. Join us as Gillard and Okonjo-Iweala give a rare insight into life as a female leader and inspire us into a powerful call to action for gender equality everywhere.

Read an excerpt of this program from The Commonwealth magazine:

This is an online-only program; pre-register to receive a link to the live-stream video.

Copies of Women and Leadership are available for purchase at checkout (U.S. domestic shipping only).

In Conversation with Jennifer Palmieri

Former White House Communications Director; Co-host, “The Circus” on Showtime; Author, She Proclaims: Our Declaration of Independence from a Man’s World 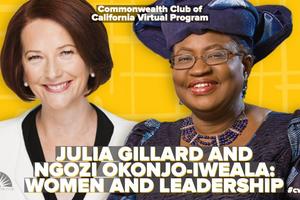