Just two weeks after the Capitol attack that resulted in five deaths, delayed the official counting of the Electoral College votes, and led to the second impeachment of a president of the United States for the first time in American history, a new president has been inaugurated in a Washington, D.C. that was on near lockdown due to the threat of domestic terrorism.

Education leaders, civic advocates and public officials recognize that one of the most important ways the country can respond to this challenging moment is through an embrace of civics education, along with a significant boost in efforts that enable all U.S. citizens to understand the civic structures of the country, as well as the roles and responsibilities of its citizens and its elected officials.

Just days after the Capitol attack, the Washington, D.C.-based The Hill published a powerful editorial about the urgent need for a renewed push for civics education. In it, Lauren Leader and Mark K. Updegrove noted,

. . . Like the surprise attack on Pearl Harbor that pulled the U.S. directly into World War II, the siege on the U.S. Capitol on Jan. 6 by a violent mob will be remembered as a “day which will live in infamy.” Much will be written about the circumstances that led to the desecration of the Capitol....(b)ut as we move forward, it’s just as urgent to consider how we can build the foundations of a more unified nation with a deeper common understanding of what it really means to be American. . . . Part of the answer lies in civics education."

Please join us for a special program as Leader and Updegrove are joined by the heads of iCivics, Louise Dube, and Generation Citizen, Elizabeth Clay Roy, to discuss why an urgent call to action for civics education is so important for the country.

Lauren Leader is the founder of All In Together, a nonpartisan, nonprofit women’s civic education organization. She is also an elected councilwoman in Harrison, NY. Her 2016 book, Crossing the Thinnest Line, widely influenced the diversity and inclusion conversation nationwide. Lauren was listed as one of Fortune’s 50 Most Influential Women on Twitter and was a 2018 Presidential Leadership Scholar. She is a member of the Council on Foreign Relations and a graduate of Barnard College.

Mark K. Updegrove is an American historian and author. He is the president & CEO of the LBJ Foundation in Austin, Texas, and presidential historian for ABC. From 2009–2017, he served as the director of the Lyndon Baines Johnson Presidential Library. He has conducted exclusive interviews with seven U.S. presidents, and is the author of several books on the presidency, including The Last Republicans: Inside the Extraordinary Relationship Between George H.W. Bush and George W. Bush, and Indomitable Will: LBJ in the Presidency. His next book, titled Incomparable Grace: JFK in the Presidency, will be published in 2021.

Louise Dubé leads iCivics. As the largest provider in the nation, iCivics champions and re-imagines civic education. Prior to iCivics, Dubé had a successful career in educational publishing and instructional technology. Dubé won the 2017 People’s Voice award from the DVF–Diller Foundation as well as the 2018 Civvys award from Bridge Alliance. She was selected as 2019 Donaldson Fellow by the Yale School of Management. Dubé began her career as an attorney in Canada, holds a law degree from McGill University and an MBA from Yale University.

Elizabeth Clay Roy is a lifelong leader of civic engagement and social change initiatives, and the new chief executive officer of Generation Citizen, a national nonprofit committed to providing youth with the knowledge and skills they need to actively participate in our democracy. Prior to joining Generation Citizen, she was executive director of TakeRoot Justice, a New York City-based social justice organization. Roy received a B.A. from Columbia University and a Masters in City Planning from the Massachusetts Institute of Technology. She and her family live in Harlem.

The program is part of The Commonwealth Club's "Creating Citizens" initiative, created with generous support from the Koret Foundation and others.

Co-founder and CEO, All In Together 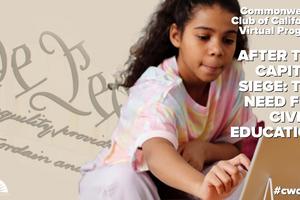