Representative Jackie Speier: How Damaged Is Our Democracy?

Rep. Jackie Speier has survived violence twice. Once in 1978, when she was a young aide to Rep. Leo Ryan and was shot and left for dead on the tarmac of an airport in Guyana after her boss was murdered trying to help members of the People’s Temple cult escape. And again last week, when she was in the House chamber in the U.S. Capitol when it was attacked.

Join Rep. Speier and retired Santa Clara County Judge LaDoris Cordell for a timely and frank behind-the-scenes look at the attack on the U.S. Capitol and its implications. What is the state of the country and of American democracy following the events of the past week? What will America look like after January 20? Can the divisions in the country be healed?

Congresswoman Speier has served in Congress since 2008. California’s 14th Congressional District stretches from San Francisco through San Mateo County to East Palo Alto. Representative Speier serves on the House Armed Services Committee, the House Permanent Select Committee on Intelligence and the House Committee on Oversight and Reform. She is also co-chair of the Democratic Women's Caucus, the Bipartisan Task Force to End Sexual Violence, and the Gunviolence Prevention Task Force.

Don't miss this opportunity to ask questions of this long-time lawmaker at a crucial point in history.

Read an excerpt of this program from The Commonwealth magazine:

This is a free-for-members program. Members: Log into your member portal to order your free tickets. Please use the email you signed up with as your username. You can also request a password reset if needed. 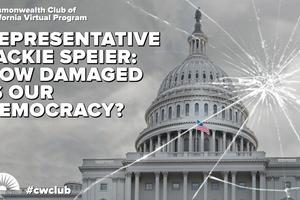 Representative Jackie Speier: How Damaged Is Our Democracy?