In a time of racial reckoning, a new film looks at a very personal attempt to address racial injustices in this country.

Ashes to Ashes is an endearing portrait of Winfred Rembert, an avid Star Wars fan and master leather-work artist who survived an attempted lynching in 1967. This moving short documentary showcases the incredible friendship he has forged with Dr. Shirley Jackson Whitaker, as she creates and establishes an interactive art exhibit to memorialize the more than 4,000 African Americans who were lynched during the Jim Crow era.

Join us for a discussion with Dr. Whitaker, Winifred Rembert, and the film's director, Taylor Rees.

Dr. Whitaker is the seventh child of Eddie and Charlie Mae Jackson from Waycross, Georgia. Dr. Whitaker attended Clark Atlanta University completing a BS degree with honors in Biology. She attended Yale University School of Medicine-Department of Public Health and obtained her medical degree form Emory University School of Medicine, the only female African American in her class. A kidney specialist by trade, an artist trained under Leonard Baskin, and a healer by passion, her Ashes to Ashes project was developed to provide hope for a better American future, one in which races of varying color and heritage can understand the importance of each other’s American history, empathize with each other’s sacrifices and tragedies, realize the legacy of impacts from suffered injustices and accept that healing is a process as much a cure, and recognize and lay to rest the 4,000 victims of vigilante justice perpetrated against a predominantly black population for simply desiring the most basic of American rights of obtaining an education, ownership of land, fair competition in commerce, the uniquely American right of voting for our governing institutions and for an equal stake in the American experience. She is currently working on the second phase of A2A: The Noose: Tread of Hate and Resilience. This will center on American history through the lens of lynching and will include an International Speak My Name Day to speak the names of the lynched.

A filmmaker, photojournalist and avid explorer, Taylor Rees is driven by an insatiable curiosity to explore and tell the stories beneath the surface. She infuses her passion for adventure into her work around environmental and humanitarian issues, bringing new perspectives and deeper public understanding to the complexities of climate change, conservation, indigenous rights, environmental justice and extractive industries. Taylor received a Masters in Environmental Management from the Yale School of Forestry, where she led the Yale Environmental Film Festival for two years before moving into a career as a full-time director, producer and shooter. Her recent documentary film Ashes to Ashes (Mountainfilm 2019) won Best Short Doc at the Oscar-qualifying River Run Film Festival. She directed From Kurils With Love and co-directed The Ghost Above (both Mountainfilm 2020) with Renan Ozturk. She has shot and directed pieces for clients including National Geographic, The North Face, United Nations, and is a Sony Artisan photographer.

Mr. Rembert grew up in rural Georgia, in a farm laborer’s house and later in the small town of Cuthbert. Raised by his great-aunt, Rembert worked with her in the cotton fields during much of his childhood, and received little formal education. As a teenager he got involved in the 1960s Civil Rights Movement. Jailed for fleeing for his life in a stolen car, nearly lynched and then cut down to serve as an example to others, Rembert was sentenced to 27 years in the Georgia Penal System. Despite the cruel prison circumstances, Rembert learned to read and write and managed to meet and write letters to his would-be wife Patsy as well as to congressmen, with the hope of gaining early release. He also learned the craft of hand-tooling leather from a fellow-prisoner. After seven years, most of which was spent on chain gangs, Rembert was released from prison, but it wasn’t until 1997, at the age of 51, that he began to work more seriously with leather as his artistic medium, creating tooled and dyed canvases that tell the stories of his life. His paintings have been exhibited at galleries across the country—including the Yale University Art Gallery, the Adelson Galleries New York, and the Hudson River Museum—and have been profiled in The New York Times and elsewhere. Rembert is the recipient of a 2017 USA Fellowship, and in 2015 was an honoree of Bryan Stevenson’s Equal Justice Initiative. Rembert’s full-color memoir, Chasing Me to My Grave: An Artist’s Memoir of the Jim Crow South, is forthcoming from Bloomsbury in 2021. 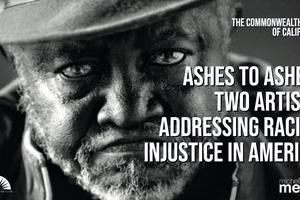