Sadhguru: Mark Twain and Vedanta at The Commonwealth Club

Join us virtually for the kind of philosophical conversation Shankara would have enjoyed, the kind captured in the best of the Upanishads, as we explore with Sadhguru the ideas that have intrigued the yogis of India for millennia, and which have seeped into Western culture in bits and pieces through the curiosity of authors such as Emerson, Thoreau, Maugham and Hesse, and from a stream of famous Indian teachers who traveled to the West to share these ideas.

We will start our conversation with Mark Twain, because in Hannibal, MO, during Sadhguru’s recent motorcycle tour of America, he said that when he was growing up “Moby Dick and Huck Finn kind of lived in my head for some time. Nobody else really occupied my mind much.” So we will discuss the ancient two-way literary and intellectual highway between India and the West, and then see how much more transcendental the conversation gets after that. 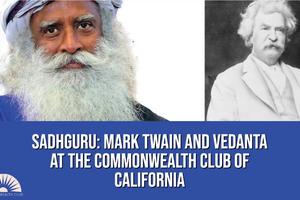 Sadhguru: Mark Twain and Vedanta at the Commonwealth Club