“Here is the great paradox of Cosmic Comic Consciousness: The world is in serious condition, and yet there is definitely something funny going on.” Swami Beyondananda, whose favorite yoga pose is tongue-in-cheek (and occasionally foot-in-mouth) is bringing his comedy disguised as wisdom—or is it wisdom disguised as comedy—to The Commonwealth Club. If you’ve never been to The Commonwealth Club, this is your opportunity to not be there again—this is a virtual event!

Seriously and humorously, in these way-too-serious times, this is the perfect opportunity to take humor more seriously and seriousness more humorously. Noted author Marianne Williamson has called the Swami “the Mark Twain of our times,” and as such Swami has a “one-twack mind”—that’s the laugh twack. And he has one “loco motive”—to keep you laughing till the sacred cows come home.

Now the Swami is not one of those gurus who expects people to accept his teachings without questioning. If you have an answerable question for the Swami, the Swami will have a questionable answer for you.

As the Swami tells us, there are two kinds of people in the world—the kind who divide people into two kinds and the kind who don’t. If you’re part of the former group, there are two other kinds of people in the world. The ones who love to laugh, and the ones who need to. If you fit either category, come laugh with (or at, he doesn’t care) the Swami. And invite your friends, because when it comes to laughter, the more the merrier. 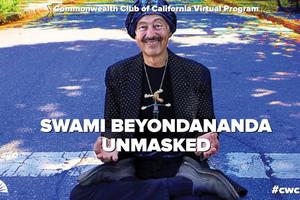