Keep the Seat: Who Should Succeed Senator Kamala Harris?

When Vice President-Elect Kamala Harris assumes her new office in January, she will leave a safe Democratic U.S. Senate seat in one of the bluest states in the country. The parlor game has begun of trying to figure out who Governor Gavin Newsom will appoint to replace Harris in the Senate. Should he choose a woman? Man? Asian-American? African-American? Latinx? European-American? LGBTQ? Rich? Poor?

The Coalition of Black Women, composed of hundreds of Black women and organizations, hopes to influence the governor to replace Harris with another female African-American. Join us for a conversation with coalition supporters and Black women leaders who are emphasizing the need for diversity in our nation's leaders, pointing to the deficit in the representation of women and African-Americans in the U.S. Senate.

This program was rescheduled from November 24.

This is a free, online-only program; pre-register to receive a link to the live-stream video.

Founder and President, She the People

Director, San Francisco Department on the Status of Women 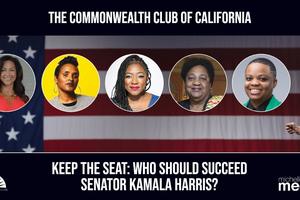 Keep the Seat: Who Should Succeed Senator Kamala Harris?