Surviving the Silence: Screening and Discussion on the 10th Anniversary of the DADT Repeal

Years before Don’t Ask, Don’t Tell, Colonel Patsy Thompson was forced to expel Army hero Colonel Margarethe Cammermeyer for being a lesbian. What no one knew was that Thompson was as well. The way Thompson handled the military trial, however, led to Cammermeyer’s re-instatement via federal court and eventual change in military policy. While Cammermeyer’s memoir was adapted as a 1995 television movie by Barbra Streisand, Thompson’s story remained a secret . . . until now.

Join us for a screening of the new documentary Surviving the Silence followed by a discussion with the principals involved. In addition to revealing history, Surviving the Silence explores Thompson’s life with now-wife Barbara Brass. They candidly share how they wrestled with heartwrenching choices in public and in private, hiding their relationship, and struggling to protect their love while preserving Patsy's career—and, how they emerged to become vibrant activists later in life.

Surviving the Silence: Film Trailer from Cindy Abel on Vimeo.

Click the button above to purchase tickets to this event. Any additional donations made during checkout will support The Commonwealth Club of California's online programming.

22nd Secretary of the Army 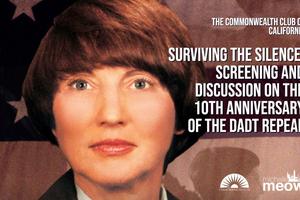 Surviving the Silence: Screening and Discussion on the 10th Anniversary of the DADT Repeal