At times it seemed that 2020 would never end, but here comes December, right on schedule, and we're holding our annual "Michelle Meow Show" year-end special. We'll relive a bit of the past year, we'll have some celebrity video cameos, and our featured speaker for the night is Sarah McBride, whom Delaware voters elected in November as the nation's first transgender state senator.

McBride's career is steeped in politics. She worked on campaigns, including Delaware Attorney General Beau Biden's 2010 campaign and Governor Jack Markell's 2008 race. In 2012, she interned at the White House, becoming the first transgender woman to work there in any role. In 2016, she became the first openly transgender person to speak at a national party convention when she addressed the 2016 Democratic National Convention.

Join us for fun program of looking back and forward, as we celebrate the end of this momentous year and we consider what's in store in 2021.

This is a free, online-only program. Pre-register to receive a link to the live-stream event.

Producer and Host, "The Michelle Meow Show," KBCW TV and Podcast; Member, The Commonwealth Club Board of Governors—Co-Host 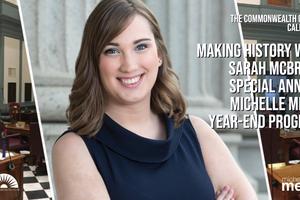