From Hurricane Katrina’s racial impacts to Jay Z’s hip hop politics, Michael Eric Dyson has uplifted race-related academia through his analysis on a diverse array of Black cultural topics. Dyson began his lengthy academic career at Knoxville College at 21 years-old after having worked in factories in Detroit, Michigan, to support his family. He later went on to receive his Ph.D. in religion from Princeton University and teach at distinguished college institutions such as Brown and Columbia before his current position as a professor of sociology at Georgetown University.

In his new book Long Time Coming, Dyson examines how the death of George Floyd jump-started a social movement that has been brewing for more than 400 years. With each chapter dedicated to a Black martyr, Dyson builds upon the anti-Black cultural and social forces throughout history that have led to the subjugation of Black people in the current day. Ending with a poignant plea for hope, Dyson points the way to social redemption. Dyson provides a guide to help America finally reckon with race.

Join Michael Eric Dyson in conversation with CNN’s Angela Rye as they both offer ways to finally address and grapple with systemic racism and racial tensions in the United States.

Copies of Long Time Coming: Reckoning with Race in America, are available for purchase. Purchased books will be sent to the address provided at checkout (domestic U.S. addresses only).

This program is free, though we invite you to make a donation during registration.

This program will be online only; please pre-register for a link to the live-stream event. 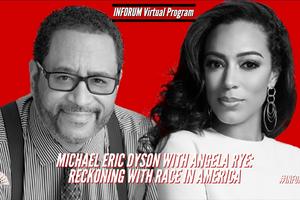