John Brennan, former director of the Central Intelligence Agency, has spent years making quick decisions on complex issues to protect the national security of the United States. With 25 years of experience in intelligence, Brennan has served as a Near East and South Asian security analyst, as the CEO of The Analysis Corporation, and as the assistant to the president for homeland security under the Obama Administration. Brennan is often applauded for his strong integrity when it comes to security issues, going as far to criticize President Trump on several occasions before his security clearance was ultimately revoked.

In his new book Undaunted: My Fight Against America’s Enemies, at Home and Abroad, Brennan describes his life from a young CIA recruit to the crucial moments that have shaped American history, including the U.S. invasion of Iraq, the assassination of Osama bin Laden, and the Russian interference in the 2016 presidential election. He demystifies the inner workings of the CIA and highlights the selfless work of the people involved in national security. Brennan offers a rare and insightful look at the concealed world of national security, the intelligence profession and Washington’s chaotic political environment. He also offers a portrait of a man striving for integrity—for himself, for the CIA and for his country.

This is an online-only event; pre-register to receive a link to the live-stream program.

Registration price includes a copy of Brennan's book; books will be mailed to U.S. domestic addresses provided at check out. 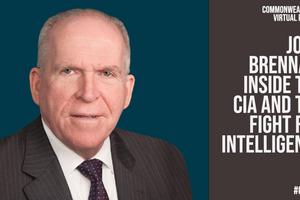