Adrian Tam: Out and Proud vs. Proud Boys

"There was a time when people like me could not win."
—Adrian Tam

Becoming the only gay Asian-American member of the Hawai'i House would be a significant achievement for any 28-year-old. Adrian Lam not only achieved that, but he did it by defeating the leader of the state chapter of the far-Right Proud Boys.

Tam will join us from Hawai'i to discuss his successful campaign—which he won with 63 percent of the vote in November's election—and his plans as a newly  minted representative of the people.

Producer and Host, The Week to Week Political Roundtable; Vice President of Media & Editorial, The Commonwealth Club of California—Co-Host 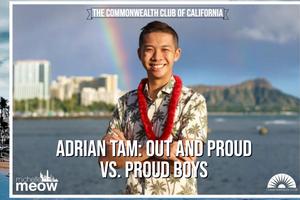 Adrian Tam: Out and Proud vs. Proud Boys