On March 12, 1947, President Harry Truman delivered an address before Congress announcing a policy of Soviet containment that would later be known as the Truman Doctrine. This was just the beginning of a global movement against communist attempts at power that changed U.S. foreign procedure and policy.

In his new book, Saving Freedom: Truman, the Cold War, and the Fight for Western Civilization, Scarborough documents the hard work of the U.S. government in containing the spread of communism around the world. The historical account focuses a particular spotlight on President Truman and his ability to rally Republicans and Democrats behind one of America’s most dramatic foreign policy shifts.

Join us as Scarborough tells the story of a president’s ability to protect democracy not only in the United States, but around the world. Joe Scarborough is the co-host of “Morning Joe” on MSNBC. He is a former Republican congressman from Florida and also writes for The Washington Post.

This is an online-only event; pre-register to receive a link to the live-stream program.

Books will be mailed to U.S. domestic addresses provided at check out. 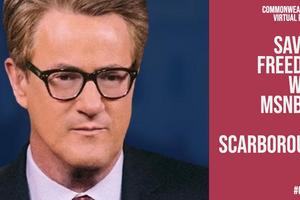