José Andrés and Sean Penn: A Conversation on Giving Back

Noted chef José Andrés and actor/activist Sean Penn are of course each well regarded for their respective talents. But in recent years, they have worked both individually and together to provide philanthropic assistance to those in need. Join us for a program that will salute these efforts and discuss what we all can do to help others during this challenging time.

Chef Andres' World Central Kitchen has served nearly 25 million meals throughout the United States, Spain and beyond in response to the COVID pandemic. By feeding health-care workers across the country with meals prepared at restaurants that would have otherwise remained closed due to stay-at-home orders, he has provided laid-off restaurant workers jobs during the pandemic. His organization also served more than 3.6 million meals to the people of Puerto Rico following Hurricane Maria, and in 2018, he was nominated for a Nobel Peace Prize.

Mr. Penn's CORE is a nonprofit organization dedicated to saving lives and strengthening communities affected by or vulnerable to crisis around the world, including in Haiti, The Bahamas, Puerto Rico, and the United States. CORE is currently committed to an integrated approach for the COVID-19 relief effort across the United States, which is inclusive of streamlined testing with results returned within 48 hours, comprehensive and timely contact tracing programs, supported quarantine and isolation services that provide shelter, food and wage replacement. The organization has been operating free COVID-19 testing sites across the United States since March, with a focus on serving vulnerable and underserved communities, targeting low-income groups, communities of color, first responders and essential workers.

At the end of this program, Chef Andrés will be presented with the John Steinbeck Award "In the Souls of the People." This award is given to writers, artists, thinkers and activists whose work captures Steinbeck’s empathy, commitment to democratic values, and belief in the dignity of people who by circumstance are pushed to the fringes. The phrase “in the souls of the people” comes from Chapter 25 of The Grapes of Wrath. Chef Andres has cited John Steinbeck as a motivator for his work, also quoting The Grapes of Wrath: "Whenever there is a fight, so hungry people may eat, I will be there.'" Mr. Penn is a past recipient of the Steinbeck Award, and other recipients include Bruce Springsteen, Arthur Miller, Joan Baez, Dolores Huerta, Michael Moore, Ken Burns and Rachel Maddow.

Come for this important program about giving back.

In conversation with Nicholas Taylor 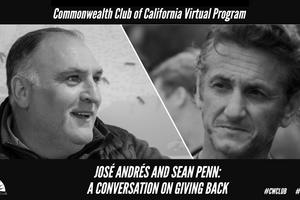 José Andrés and Sean Penn: A Conversation On Giving Back