Join us for this special program in The Commonwealth Club's series recognizing recipients of the Club's 2020 Distinguished Citizens Award. This program honors Lauren (Laurie) Dachs and her colleagues at the S. D. Bechtel Jr., Foundation. The Foundation, based in San Francisco, was established in 1957 by Stephen D. Bechtel, Jr., as a reflection of his personal commitment to ensuring a prosperous California. To this day, Mr. Bechtel remains involved with the foundation as chair of its board, and his daughter, Laurie Dachs, serves as president. The foundation is a grant-making organization that "invests in preparing California’s children and youth to contribute to the state’s economy and communities, and in advancing management of California’s water and land resources.” In 2009 the foundation made a pivotal decision to spend down its assets in a defined period of time. The foundation will sunset at the end of 2020. The Commonwealth Club is pleased to honor the foundation's myriad achievements.

In addition to her work with the Bechtel Foundation, Laurie Dachs serves on the advisory council to the Public Policy Institute of California’s Water Policy Center and on the board of directors of the Water Foundation. In the recent past, she served on the board of directors of the Land Trust Alliance and on the advisory council of Stanford’s Woods Institute for the Environment.

She has been an advisor or board member for many environmental, educational, and health organizations, including Stanford University, The Nature Conservancy of California, Children’s Hospital and Research Center in Oakland, Head Royce School, The Thacher School, Lawrence Hall of Science, and the Center for Underrepresented Students in the College of Engineering at the University of California, Berkeley. She is also a founder of The Lake School, a nonprofit preschool located in Oakland. Laurie graduated from Stanford University with a Bachelor of Arts degree in psychology, and she is a fellow of the American Academy of Arts and Sciences.

Joya Banerjee joined the Bechtel Foundation in 2009, and she oversees the foundation’s Environment Program. She works with the Environment team to advance water management and land stewardship in California, with a particular focus on advancing integrated solutions, building field capacity, and developing new partnerships. Prior to joining the foundation, Ms. Banerjee was an attorney at Latham & Watkins and worked for the City of New York, first with the Mayor’s Office of Operations and later with the Economic Development Division of the Law Department. Banerjee graduated from the University of Southern California and received a Juris Doctor degree from Columbia Law School. She currently serves on a range of advisory boards; she is a board member for the newly formed state California Water Data Consortium and the San Francisco-based 826 Valencia.

Arron Jiron joined the Bechtel Foundation in 2012 and is the associate program director for the Education Program. He leads the team’s grant making in education policy and advocacy, with an overall focus on supporting California’s implementation of new math and science standards and on expanding civic learning, character development, and environmental literacy to improve the quality of student learning in and out of school.

Before joining the foundation, for six years, Mr. Jiron served as program officer at the David and Lucile Packard Foundation, where he led grant making for policy, advocacy and systems building to advance early education and youth development programs. Prior to that, he was the development director for a state intermediary that improves access and quality of youth development programs in California. Mr. Jiron started his career at a community action agency in Nebraska, where he led the creation of the Youth Opportunities Center, a comprehensive education division for low-income youth and young adults. There, he co-developed a nationally recognized restorative justice project for youth in the juvenile justice system, launched a YouthBuild program, and designed a regional workforce development system for adults.

Come for this tribute to one of California and the nation's most highly regarded philanthropic organizations.

President and Vice Chair of the Board of Directors, S. D. Bechtel, Jr. Foundation 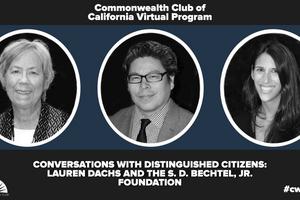