Few 18-year-olds have thousands of Twitter followers, unless they're actors or boy band stars. But Georgia teenager Niles Francis' 21,500 Twitter followers—including many established political journalists, analysts and strategists—follow him because of his expertise at analyzing voting trends and data. A regular contributor to Decision Desk HQ, Francis has earned praise for his insight and skill.

Atlanta Journal-Constitution political reporter Greg Bluestein praised Francis in Jewish Insider, saying he has "quickly made a mark on Georgia politics with his quick wit and incisive analysis. Most people are stunned to discover he’s a teenager and not a grizzled veteran politico—a testament to his remarkable political aptitude.”

Join us for a live conversation with the Atlanta-based political wunderkind about analyzing votes, trends, and just what he makes of the rare double-run off elections for U.S. senators in his home state of Georgia. 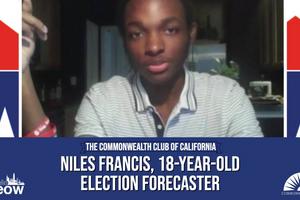