Join us for a virtual conversation with Pulitzer Prize-winning journalist Thomas Ricks to discuss four founding fathers, their educations and, in particular, their devotion to the ancient Greek and Roman classics—and how that influence would shape their ideals and the new American nation.

Ricks, provoked by the 2016 presidential election, awoke the next morning wondering what kind of nation we had now. He decided to go back and read the philosophy and literature that shaped the founders’ thinking, and the letters they wrote to each other debating classics like The Iliad, Plutarch’s Lives, and the works of Xenophon, Epicurus, Aristotle, Cato and Cicero. Ricks creates fresh portraits of the presidents we thought we knew by showing that Washington absorbed the classics mainly from the elite culture of his day, Adams from the laws and rhetoric of Rome, Jefferson from classical philosophy, especially Epicureanism, and Madison from his years studying the ancient world like a political scientist.

First Principles follows these four from their youth on, as they grapple with questions of independence, and forming and keeping a new nation. But Ricks not only interprets the effect of the ancient world on each president, and how that shaped our constitution and government, he also offers us a startling contrast with our leaders today, reinforcing the currently overlooked idea that learning from history is more socially productive than canceling it.

Copies of Ricks' book are available for purchase at checkout (U.S. domestic shipping only)

This is a free, online-only program; register to receive a link to the live-stream video

Thomas Ricks
Journalist, The Washington Post and The Wall Street Journal; Author, First Principles: What America's Founders Learned from the Greeks and Romans and How That Shaped Our Country 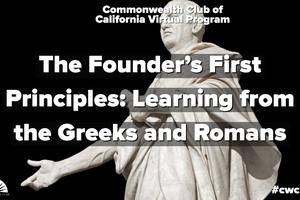