John Hope Bryant says American opportunity is not dead. In his new book, Mr. Bryant outlines the mindset and practices that he says will allow all of us to achieve the American Dream, no matter what our current circumstances. He discusses his own rise from humble beginnings, and argues that individually, we can change our mindset from survivor to thriver to winner, and move beyond just getting by or being financially independent to becoming wildly successful.

Mr. Bryant is a prominent thought leader on financial inclusion, economic empowerment and financial dignity. His Operation HOPE, Inc.is the largest nonprofit, best-in-class provider of financial literacy and economic empowerment services in the United States for youth and adults. Bryant is also founder and principal of The Promise Homes Company, the largest minority-controlled owner of single-family rental homes in the United States.

He has been listed as one of Time magazine’s “50 Leaders for the Future." The last five United States presidents have recognized Bryant's work, and he has served as an advisor to the last three sitting U.S. presidents from both political parties. He is responsible for financial literacy becoming the policy of the U.S. federal government. Bryant has received Oprah Winfrey’s Use Your Life Award, the John Sherman Award for Excellence in Financial Education from the U.S. Treasury, and The Commonwealth Club's Distinguished Citizen Award.

Come for an inspirational discussion with real world advice for achieving financial security.

This is a free, online-only event; pre-register to receive a link to the live-stream event

Copies of Mr. Bryant's book are available for purchase during registration (delivery to U.S. domestic addresses only)

This program is generously underwritten by First Republic Bank

John Hope Bryant
Entrepreneur; Philanthropist; Founder and Chairman, Operation HOPE, Inc.; Author, Up From Nothing: The Untold Story of How We (All) Succeed 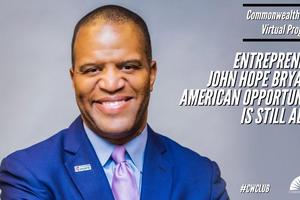