Catching the Wind: Edward Kennedy and the Liberal Hour

Join us for a virtual conversation with Neal Gabler, award-winning author and film critic, to discuss volume one of his new biography of Ted Kennedy—an immersive journey through the life of a complicated man and a sweeping history of the fall of liberalism.

Gabler pursues the Ted Kennedy seldom seen beneath the well-known images of the reckless hedonist who rode his father’s fortune and his brothers’ coattails to a Senate seat at the age of 30, and finds a man both racked by and driven by insecurity. Considered by his contemporaries as the least of the Kennedys, his childhood was filled with numerous humiliations, including self-inflicted ones, all the while being pressured to rise to his brothers’ level.

Kennedy entered the Senate to low expectations—a show horse, not a workhorse. But he drew upon his “ninth-child’s talent” of deference to and comity with his Senate elders to become an influential legislator. Using his brothers’ moral authority, Kennedy became a moving force during the great “liberal hour” that saw the passage of the anti-poverty program and the Civil Rights and Voting Rights Acts. Then, after the deaths of John and Robert and the election of Richard Nixon, Kennedy became the leading voice of liberalism, challenging Nixon to keep the American promise to the marginalized, and provoking Nixonian terror of a Kennedy restoration. Gabler also chronicles how the fatal accident on Chappaquiddick Island in 1969 dealt a serious blow not just to Kennedy's political career but to liberalism itself. 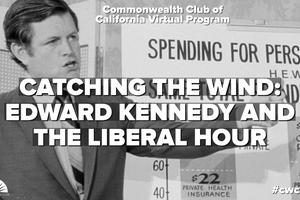 CATCHING THE WIND: EDWARD KENNEDY AND THE LIBERAL HOUR