Join us in conversation with Jacob Goldstein, co-host of the NPR show “Planet Money,” as he talks with Molly Wood from “Marketplace Tech” about the irreverent concept of money and its evolution over time. In his new book, Money: The True Story of a Made-Up Thing, Goldstein illustrates the use of money and how it has been an important factor in society for thousands of years.

But what is money? Goldstein asserts that the concept of money only works because we as a globe have all collectively agreed to believe in it. He provides a detailed history of money from the rise of coins in ancient Greece to the emergence of shadow banking in the 21st century. The book follows the stories of the fringe leaders who first saw money as a viable system to exchange goods. The various thinkers presented in the book quickly learned that money is nothing more than a concept, only solidified by the choices we make.

He says that these choices we decide on affect who gets more money and who gets less, who gets to take risks when times are good, and who gets screwed when things go bad. Join us to learn the story of the choices that gave us money as we know it today.

Copies of Money: The True Story of a Made-Up Thing, are available for purchase; purchased books will be sent to the address provided at checkout (U.S. domestic addresses only)

This is an online-only event; please pre-register for a link to the program

This program is free, though we invite you to make a donation during registration to support the production of our programming 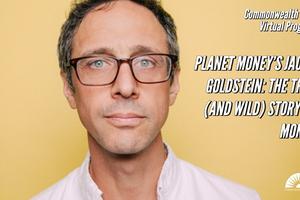 THE TRUE (AND WILD) STORY OF MONEY