Join us for this special program in The Commonwealth Club's series recognizing recipients of The Club's 2020 Distinguished Citizens Award. This program honors Rod Diridon, Sr., a staunch transportation and environmental advocate for most of his life.

As The San Jose Mercury News observed, "Along the way to having a passenger station named in his honor that has become the catalyst for the next iteration of San Jose’s downtown, he chaired the first campaign in California for a sales tax for transit, helped create the Santa Clara Valley Transportation Authority, and organized the joint powers boards for rail construction projects. He has chaired dozens of charitable nonprofit organizations dealing with issues in transportation, the environment, parks, local history and journalism."

From 1993 to 2014, Mr. Diridon served as executive director of the Mineta Transportation Institute, a transportation policy research center created in 1991 by Congress. He is known as the father of modern transit service in Silicon Valley and has chaired more than 100 international, national, state and local programs, most related to transit and the environment. He frequently provides legislative testimony on sustainability.

His political career began in 1971 as the youngest person ever elected to the Saratoga City Council. He retired in 1995 because of term limits after completing five terms on and six times chairing both the Santa Clara County Board of Supervisors and Transit Board. He’s the only person to chair the San Francisco Bay Area's (119 cities, 27 transit agencies, and 9 counties) three regional governments: The Metropolitan Transportation Commission, the Air Quality Management District, and the Association of Bay Area Governments. He chaired nine successful rail system development project boards. In 1995 the region’s main train station was renamed the “San Jose Diridon Station” upon his retirement. Mr. Diridon is now focused on combating climate change by convening the Rotary Climate Action Council.

Conversing with Mr. Diridon will be Nuria Fernandez, a 35-year veteran of the transportation industry. In addition to her role with the Santa Clara Valley Transportation Authority, she serves as chair of the American Public Transportation Association.

Come for a salute to one of the country's most highly regarded transportation leaders and an engaging conversation about the future of transit, especially in a time of pandemics, fires, hurricanes and floods. Bring your questions as well.

In Conversation with Nuria Fernandez 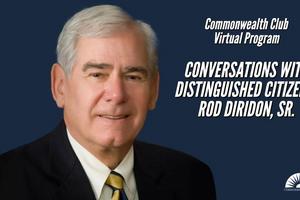