LGBTQI Leaders: Where Do We Go from Here? A Post-Election Discussion

In late October, as the long presidential campaign wound down to its denouement, President Donald Trump's daughter Tiffany appeared at a Florida rally to proclaim her father as the most pro-LGBTQ president ever. But instead of helping the president with LGBTQI voters, the event caused many people to reflect on the president's policies that they say have targeted members of the community by removing legal protections.

Join us this Thursday at noon, two days after Election Day. Our expert panel will discuss the political situation facing LGBTQI people after one of the most important elections of modern times. What will the president do in the next 4 years? Will the more-conservative U.S. Supreme Court expand religious exemptions at the expense of LGBTQI rights? How did LGBTQI candidates — and LGBTQI-ally candidates — do in this election? What should priorities be in 2021 and beyond?

Don't miss this special edition of "The Michelle Meow Show" at The Commonwealth Club.

This is a free, online-only event; pre-register to receive a link to the live-stream program. 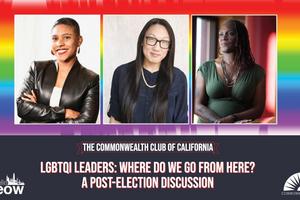 LGBTQI Leaders: Where Do We Go from Here? a Post-Election Discussion