Dr. Michael V. Drake, M.D., was appointed as the 21st president of the University of California this past summer. He oversees UC’s world-renowned system of 10 campuses, five medical centers, three nationally affiliated labs, more than 280,000 students and 230,000 faculty and staff.

Dr. Drake previously served as president of The Ohio State University from 2014 through June 2020. Prior to his six years at OSU, he served in several roles at the University of California, including nine years as chancellor of UC Irvine and five years as the systemwide vice president for health affairs.

Dr. Drake received his A.B. from Stanford University, his M.D. and residency from UCSF, and his fellowship training in ophthalmology at UCSF and the Massachusetts Eye and Ear Infirmary. He subsequently spent more than two decades on the faculty of the UCSF School of Medicine, ultimately as the Steven P. Shearing Professor of Ophthalmology.

During his years as chancellor at UC Irvine, the campus rose to join the top 10 public universities in U.S. News & World Report’s annual list and was ranked by Times Higher Education as the No. 1 university in the U.S. under 50 years old. During his tenure at the campus, the four-year graduation rate increased by more than 18 percent, while undergraduate enrollment and diversity increased significantly.

Dr. Drake is an elected member of the National Academy of Medicine and the American Academy of Arts and Sciences. He has received the UCSF School of Medicine’s Clinical Teaching Award and the University of California Presidential Medal in recognition of exemplary service.

Join this prominent academic leader the day after the election for a timely discussion of the challenges facing higher education during a global pandemic and societal unrest.

This program is part of The Commonwealth Club's Series on Ethics and Accountability, underwritten by The Travers Family Foundation.

This program will be online-only; pre-register for a link to the program

In Conversation with Monica Lozano 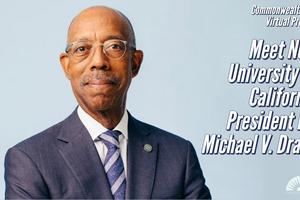