Join us for a virtual conversation with award-winning historian David Reynolds to discuss his new biography of Abraham Lincoln, which also illuminates the riotous tumult of American life in the decades before the Civil War. It was a country growing up and being pulled apart at the same time, with a democratic popular culture that reflected the country's contradictions.

From New England Puritan stock on his father's side and Virginia Cavalier gentry on his mother's, Lincoln was linked by blood to the central conflict of the age, and was aided by his genius for striking a balance between opposing forces. Lacking formal schooling but with an unquenchable thirst for self-improvement, Lincoln had a talent for wrestling and bawdy jokes that made him popular with his peers, but also had an appetite for poetry and prodigious gifts for memorization that set him apart throughout his childhood, and in his years as a lawyer and a politician.

No one can transcend the limitations of his time, and Lincoln was no exception. But Lincoln did, at each stage of his life, arrive at a broader view of things than all but his most enlightened peers. As a politician, he moved too slowly for some and too swiftly for many, but he always pushed toward justice while keeping the whole nation in mind.

Copies of Abe are available for purchase at checkout (U.S. domestic shipping only)

This is a free online-only program; register to receive a link to the live-stream video; we welcome donations made during the registration process to help support the production of our online programming

Reynolds photo by The Graduate Center, CUNY; Lincoln photo by Matthew B. Brady

Distinguished Professor, The Graduate Center of the City University of New York; Author, Abe: Abraham Lincoln in His Times 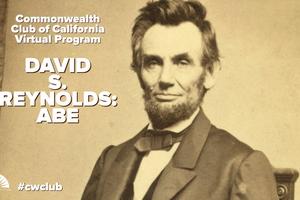