Fox Business anchor Maria Bartiromo and The Wall Street Journal's James Freeman say that America needs an economic revival after the coronavirus shutdowns and argue that the playbook that resulted in "the greatest job market in history" can now put Americans back to work. Bartiromo and Freeman say that President Trump's cutting of red tape and slashing business tax rates spurred corporate investment that led to record numbers of U.S. job openings, and they say these policies will once again lead to prosperity.

Maria Bartiromo is a two-time Emmy Award-winning journalist, who was the first person to report live from the floor of the New York Stock Exchange, in 1995, and in 2011 made history once again as the first female journalist to be inducted into the Cable Hall of Fame.

James Freeman is a former investor advocate at the U.S. Securities and Exchange Commission.

On the eve of the presidential election, come for a spirited discussion of the U.S. economy, and bring your questions.

This program will be online-only; pre-register for a link to the program

In Conversation with Duf Sundheim 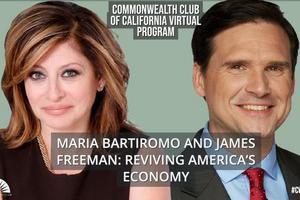